The battle of bossenden wood

THE CURLING FAMILY
The following extract concerns one of our ancestors, Edward Curling, who along with some friends were found guilty of murder in 1838.
​
The Battle of Bossenden Wood 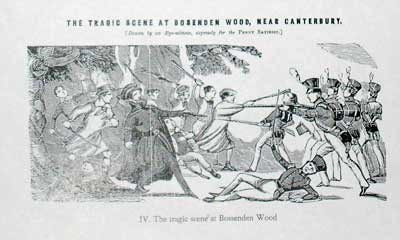 This tragic story started with the landing at Herne Bay in 1832 of one John Tom, alias 'Squire Thompson', 'Count Rothschild' or 'Sir William Honeywood Courtenay'.  He was originally from Cornwall, and appears to have suffered with mental illness for several years.  He was adept at deceit, and was soon a notable Canterbury figure, and in 1832 stood for Parliament. He promised to improve the conditions of the poor. He failed in this attempt and was subsequently admitted to the lunatic asylum at Barming. On his release, he made for Boughton and stayed with his friend George Francis.  This friendship soon turned sour and he ingratiated himself with the local farmers and smallholders.  He became well known to the Culver, Wills, and Hadlow families, among others.

In May 1838 'Sir William' drew a large crowd of followers; he was seen as a threat to law and order and a warrant for his arrest was obtained.  The local constable, John Mears, a plumber, was responsible for arresting him. John Mears' brother Nicholas was shot by John Tom when they went to arrest him. John Mears and Daniel Edwards escaped to alert the magistrates.

At the Court, it was stated that it was the women in the Hernhill and Boughton neighbourhood that had caused the trouble, inciting their husbands to commit breaches of the peace.  William Burford’s wife had in fact made desperate attempts to get her husband to leave the group, but was unsuccessful.  She was then arrested as an accomplice and faced execution or transportation, but was eventually freed.

Courtenay and his dead followers were buried in Hernhill churchyard.

On the same day an inquest at the White Horse, Boughton, returned a verdict of "justifiable homicide" on the deaths of Courtenay and his followers.  Those who were following Courtenay and were killed were: Stephen Baker (22), William Foster (33), William Rye (46), Edward Wraight (62), Phineas Harvey (27), William Burford (33), George Griggs (23), and George Branchett (49). Griggs and Branchett were buried in Boughton churchyard; all the rest, including Courtenay, were buried in Hernhill churchyard.

Over the following days about thirty of Courtenay’s followers were arrested and appeared either at the inquest or at the petty sessions in Faversham. Sixteen were committed for trial on a charge of murder. Ten men would eventually stand trial at Maidstone Assizes in early August, the rest having been discharged by the assize grand jury.  Two (Thomas Mears and William Price) were charged with the murder of the brother of the constable and nine (Thomas Mears, Edward Curling, Alexander Foad, William Foad, Richard Foreman, Thomas Griggs, Charles Hills, Edward Wraight, and William Wills) with the murder of Lieutenant Bennett, with one, Thomas Mears, charged with both murders.


Thomas Mears and William Price stood trial first. The jury returned a guilty verdict, with a recommendation for mercy. The judge, Lord Denman, duly pronounced sentence of death but immediately told the men that the sentence would not be carried out. Seeing this result, the nine charged with the murder of Lieutenant Bennett pleaded guilty; they too were sentenced to death but immediately reprieved.